Wow, what a weekend!  It was a weekend that I’ve had on the calendar for a few months now and one that did not disappoint.  Saturday morning at about 9:40, I finished the 2017 Lake Lure Triathlon in a little over an hour and thirty-six minutes, eight minutes faster than my last race at Lake Lure!  In this blog post, I want to take you back to the race and share some of my thoughts and feelings that I had before, during and after the triathlon.  Put on your swim cap, your goggles and let’s go.

I had my two alarms set for Saturday morning to wake me at 5:00 am.  While it was only a 30 minute drive to Rumbling Bald Resort from my mother’s home, I felt I needed to get up and get moving early.  When I awoke it was absolutely pouring the rain.  I just knew the weather would cause them to cancel or modify the event.  Regardless, I showered to “wake up” and ensured all my gear was in my pack and ready to go.  I made a cup of coffee and set out on my way.  Just as I got to the Lake Lure area, the rain stopped and I could see some twinkling starts in the sky.  “Yes, it’s going to be a beautiful morning for the race,” I thought.  I arrived at the site early, but chose to drive the bike course just to familiarize myself with the route.  Some of my thoughts during my drive around the bike course were, “This climb is going to be a tough hill.  Oh, I can come out of my saddle and not lose momentum on this ascent.  Wow, this downhill, with a hairpin curve, is scary.”  I remembered the course some, but just a little extra knowledge couldn’t hurt for the race.

When I got to the parking area, I was one of the first thirty or so racers there.  It

was 6:33, almost an hour and a half from the start.  I had plenty of time to get my registration packet and organize my transition area.  As I parked, I had my Spotify playlist blasting ALO and Jack Johnson’s “Girl, I Wanna Lay You Down.”  Some of the people in neighboring cars, who were unloading their bikes, may have thought that I was being a little obnoxious to keep it playing loudly with my doors opened, but I didn’t care.  I was into the song, one that I had recently added to a my playlist because well, let’s just say it’s a good song that has a great “groove” to it and it really gets my heart pumping.  Music allows me to focus mentally, and this song was doing just that.  I didn’t care what others thought at that time; I was going to let the song come to an end before I turned it down.

With my earbuds now in, and my bike beside me, it didn’t take me long to get my pack and gear down to the transition area where I gathered my registration packet, my race number and my time chip.  I also had to get my race number and age marked on my thighs, calves and biceps.  This helps the race organizers to keep track of you and for the other competitors to

know if you are competing against them in their age group or not.  Once I completed those tasks I organized my transition area, the small area where you store your bike, change into your shoes and get ready for each element of the triathlon.  It was 7:30 and I was ready!

At 7:45, I made my way over to the start line. I was so antsy to start the race, not really jittery, just ready to go.  With a little more time, I stretched properly,  warmed up a little more, and had my swim cap on and goggles ready.

A triathlon is an endurance sport, but so much of  it is also mental.  Being in the right mindset, being positive and focused on each event, one at a

time, is so important.  As I stood there at the start line, I kept my mind focused on getting to each site-buoy, keeping my “form,” and maintaining my pace, not the other racers’ paces.

The race started and the buzzer beeped.  I hit the water and I was off, unfortunately, letting my adrenaline dictate my pace.  I started off a little fast and could feel it after the first hundred of so meters.  I tried to reign myself in, but the competitor in me wanted to keep up with the guy right in front of me.  At about two hundred meters into the swim I came up for a breath, just as the wake from “that guy” crested into my mouth.  I took on what seemed like a half of cup of lake water and had to swim the next few strokes trying to cough up the water and catch my breath.  I didn’t panic and was able to regain my composure and get to the turn buoy without missing a stroke.  As I made the turn, I was heading to the swim finish.  During that final stretch I felt strong and had finally settled into a good pace with a good rhythm.  In my mind, I was swimming to the songs that I had blasting in the car from earlier.  The last 200 meters were also refreshing because, with each breath I took, I could see the sun rising above the NC mountains.  You see, I breath only on my right side when I swim and each time I came up for air, the sun was there encouraging me on.  Sixteen minutes from the start, I had made it to the swim finish.  I came out of the water feeling good, time for the bike segment.

At the transition, I put on my sunglasses, fastened my helmet, tightened my shoes and drank a little energy drink, 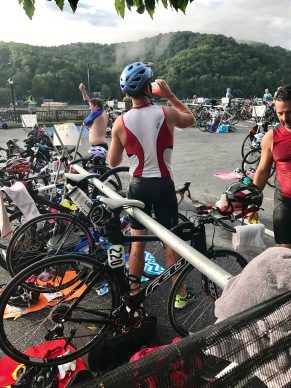 before pushing my bike out of the transition area where I would start the next phase of the race.  The bike portion of the race was 22.5 kilometers of mountain roads with long, steady climbs and fast descents.  I did my best to settle into a consistent cadence and power my way through the hills.  Getting into the right gears, at the proper time, was a strategy that I knew was important to keep good momentum on each and every decent-to-ascent along the course.  Missing a gear, or waiting too long to change the gears, can really cause you to lose some serious momentum and allow other racers to pass with ease.  During this race, I felt like I did an excellent job with implementing my bike and gear strategies, allowing me to cut over 9 minutes off of my previous bike split during my last Lake Lure Triathlon.  The last descent back into the resort was very steep and very curvy.  Proper braking was required to ensure that I made the curves safely.  Emergency crews were standing ready at the top and bottom, ready to help, if needed.  Fortunately, all racers remained safe.  Forty-six minutes after I mounted my bike, I was back at the transition preparing for the last leg, the run!

As I transitioned off of my bike to the five kilometer run, my legs were exhausted.  If you’ve

ever ran in a triathlon, you know the feeling you have when your legs are used to going in circles from the bike and then all of a sudden you are trying to get them to go up and down.  To make it worse, the first half of the Lake Lure run, when my legs felt mostly like Jello anyway, was all uphill.  I was struggling to keep a decent pace, but was determined to keep up with the runners in front of me; I was going to finish strong.  Just as I got to the turnaround to head back toward the finish line, my left quadriceps kept feeling like it was going to cramp and the medical bracelet holding my time chip was cutting into my heel with each stride.  “Mind over Matter,” I kept telling myself.  I altered my stride just slightly and the cramp never came and I ignored the pain coming from my bloody heel.  I was getting close and could think of nothing but picking up the pace and finishing the race strong. Coming around the last turn and hitting the white sandy beach at Rumbling Bald Resort was quite the feeling.  Sprinting to the end, I

made it through the corral, lined by spectators cheering on all of us racers.  I crossed the finish line as the announcer welcomed me in by name. The amazing volunteers at the race draped an iced towel over my shoulder, handed me water and kept congratulating me on the race, like I was the winner or the only one there. What an amazing feeling to be welcomed at the finish line after a race like that!  I finished the race in one hour and thirty-six minutes, 65th place out of 157 male racers.  I was proud of my results and my accomplishments.

I committed to doing the Lake Lure Triathlon at the end of April and trained almost every day since then to prepare for it! There were times during this triathlon journey that I didn’t feel like working out or wanted to cut my runs short, but I stayed persistent.  I kept thinking about what I wanted to accomplish.  My mind kept going back to a quote that I read from my all time favorite athlete, Michael Jordan.  He said, “If you can’t stop thinking about it, don’t stop working on it.”  This quote not only applies to my triathlon training and my thought of my fitness goals, but also personally, with the relationships that I have been blessed to have in my life.  I constantly think of the people that are important to me, so I strive each day to work on those relationships by being a better man and a better dad!

Do you have someone or something in your life that you can’t stop thinking about?  Are there goals that you want to achieve, or habits you want to break?  If so, turn on your favorite play list to get your heart pumping and start working on them.  Imagine yourself running through the corral as you approach your finish line with all of the people you love there, cheering you on, congratulating you on the goal that you are about to accomplish!  The journey may be, and probably will be tough.  It may be exhausting at times, but stay persistent because the accomplishment of getting past the finish line is such a great feeling!

Have a blessed week!

Dad of Three Amazing Kiddos....Blessed beyond Blessed! View all posts by mattwells07

Welcome to my journey as a dad, a man, and a friend.  I hope my experiences and thoughts that I will share can be of some benefit to someone out there.   Not sure where this blog is going to take me, but stay tuned….